There were a number of other designation systems associated with airborne hardware.

Balloons and airships of the Air Force’s predecessors were not considered aircraft but rather as individual ships. No designation system was used and no serials were assigned although balloons and airships were classified by types and numbering within these types was used for identification.

Until 1954 Navy airships were classified as Z (for Zeppelin) class ships and separate from aircraft.

The following classifications were used:

The USS Shenandoah (ZR-1) was based on the design of the German L-49, a World War I high altitude bomber which had been forced down intact in France in October, 1917. It was constructed  during 1922 and 1923 with parts fabricated at the Naval Aircraft Factory in Philadelphia, and final assembly at the Lakehurst Naval Air Station in New Jersey.

ZR-2 was bought from Britain where construction had been started on it as the R38 before cancellation. It was bought in October 1919, and flew for the first time on 23 June 1921 but crashed on 23 August 1921 at Hull, UK, before the US Navy could take delivery of it and did not officially receive its US designation, though it was painted in accordance of its planned Navy designation.

The USS Los Angeles (ZR-3) was built in Germany by the Zeppelin Company as LZ-126.

The USS Akron (ZRS-4) and USS Macon (ZRS-5) were designed for long-range scouting in support of fleet operations. Often referred to as flying aircraft carriers, each ship carried F9C-2 Curtiss Sparrowhawk biplanes which could be launched and recovered in flight, greatly extending the range over which the Akron and Macon could scout the open ocean for enemy vessels.

Both were designed and built by the Goodyear-Zeppelin Corporation, a joint venture and patent sharing arrangement between the Luftschiffbau Zeppelin and the Goodyear Tire and Rubber Corporation. The contract was awarded on 16 October 1928. 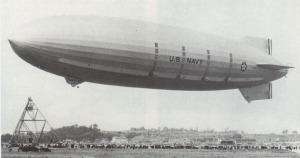 From 1935 to 1942 the US Navy studied concepts of rigid airships to be used as an aircraft carrier and a training airship. They were to carry nine aircraft which were to be based on the Douglas BT-1, and would probably have received the ZRCV and ZRN designations.

Other balloons were serialled in the aircraft system and have subsequently discussed as undesignated aircraft.

From 1954 balloons were treated as aircraft and have been discussed with the appropriate aircraft designations.

From 1962 balloons/airships were classified as aircraft in the Z‑series. They have been discussed with the appropriate designations.

External stores, incl. armament used by the US Armed Forces is designated in a number of series consisting of three letters followed by a sequential number.

The first two letters indicate the type of equipment, the third letter is U = Unit.

The first two letters are:

‘Iron’ bombs are not included in this designation series, instead they are identified by a MK = mark, followed by a number. At times special versions of these bombs may have had external stores designations.

The first letters are

The second letters are

The third letters are

The first letters are

The second letters are

In 2003 the letter D was introduced for flight control systems for unmanned aerial vehicles (in the Q series). Known designations are

Aeronautical support equipment has been indentified by a three letter code ending in U or K. Further details can be found at http://www.designation_systems.net.

Later the designation SB for Space Booster was introduced.

Examples of early satellite designations include KH, RH and VH whilst the letters P and S have also been used.

The KH designations have been used for military reconnaissance satellites. Although ‘Keyhole’ is often cited as the meaning of the acronym KH, it is suspected that the meaning of this military designation is different. This suspicion is supported by the use by the US Air Force of the letter K to designate aircraft cameras (such as KA-59 for a 1965 camera designed for medium altitude reconnaissance missions), whilst the meaning of the letter H may be found in the apparent designations RH and VH and the associated designations VS and VU. The two latter are for non-satellite detection systems for surface and sub-surface nuclear explosions. Since the letters S and U have been used in other designation system to indicate surface and sub-surface, H may mean satellite borne. Note that this assumption is not in anyway supported by references.

In app. 1985 a separate series of satellite designations was introduced in which the letter S was preceded by a mission indicator, being E = communications, L = surveillance, N = Navigation and W = weather.

S-11     not assigned to avoid confusion with XSS-11 satellite

S-12     not assigned to avoid confusion with XSS-12 satellite